Avalon is the only incorporated city on Santa Catalina Island of the California Channel Islands. Close to one million people travel to Catalina Island every year, many of them from Los Angeles which is, in the lyrics of the song, “26 miles across the sea.” The sons of Phineas Banning bought the island in 1891 and established the Santa Catalina Island Company to develop it as a resort, making Avalon a resort community. They built a dance pavilion in the center of town, an aquarium, and created the Pilgrim Club (a gambling club for men only). Just as the Bannings were anticipating the construction of a new hotel, their efforts were set back on November 29, 1915, when a fire burned half of Avalon’s buildings, including six hotels and several clubs.

In February 1919, chewing gum magnate William Wrigley, Jr. bought a controlling interest in Santa Catalina Island and its associated properties from the Banning Brothers. Wrigley devoted himself to preserving and promoting it, investing millions in needed infrastructure and attractions, including the construction of the new Catalina Casino, completed May 29, 1929. In its heyday in the 1930s, due to its proximity to Hollywood, Catalina Island was a favored getaway destination for Hollywood stars such as Clark Gable. The island also served as a filming location for dozens of movies. In order to encourage growth, Wrigley purchased additional steamships to service Avalon and brought attention to the town by having his Chicago Cubs use the island for the team’s spring training from 1921 to 1951, absent the war years of 1942–45.

Glass bottom boats tour the reefs and shipwrecks of the area, and scuba diving and snorkeling are popular in the clear water. Lover’s Cove, to the east of town, and Descanso Beach, to the west of the Casino (far right in photo), are popular places to dive. The area is famous for the schools of flying fish and the bright orange Garibaldi which teem in local waters.  In 1958, the song “26 Miles” by the Four Preps hit number 2 on the Billboard charts. The main theme of the song is summed up in the last line in the refrain, stating that Santa Catalina is “the island of romance”, with the word “romance” repeated four times.

Two Harbors is the second, and much smaller, resort village on the island, located at the isthmus of the island, north of Avalon. There is also a place called Camp Emerald Bay on the north end of the island that was a Boy Scout camp until 1991.  The Girl Scouts were also forced to move from their camp at White’s Landing, when its lease with the Catalina Island Conservancy expired that same year. “The Catalina Experience™” now takes you to White’s Landing — gateway to Catalina’s interior and positioned on the island’s most expansive beach. 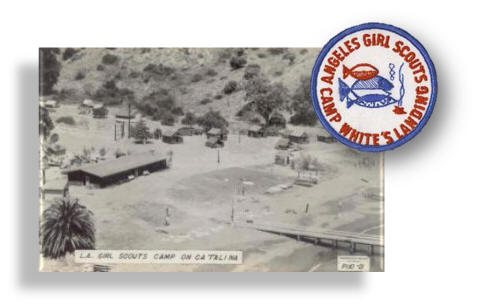 On http://www.vintagegirlscout.com/campCA.html, I found this ancient photo of this magical place, described as follows in the camp song that I still remember.

We canoe and we row

Lots of places to go.

There are boars and S’mores and a beautiful view!”

I don’t remember how big the place was, how primitive it was, or what its proximity to the Boy Scout camp was when I was a Girl Scout camper there for a summer or two in the late 1960s.  The main thing that sticks out in my mind from my time there was meeting a fellow GS camper who told me she wanted to convert to Judaism after reading Leon Uris’ Exodus.  I guess we were all impressionable young teens then and, even though I myself was heavily into the romance of the Jewish state portrayed in that novel, I thought this girl was crazy for wanting to be Jewish if she wasn’t born into it!

In retrospect, I guess the Girl Scouts had a bigger impact on the formation of my adult ideals than I was aware of at the time.  I was a member of the organization from first grade almost until high school graduation.  The GSUSA timeline on their website describes the 1960’s in the excerpt below and includes a photo of Girl Scout Cadettes on Earth Day, 1970, which was also a cause in the forefront of my still-forming political awareness at the time.

“During this tumultuous and vibrant decade, Girl Scouts held “Speak Out” conferences around the country to lend their voices to the fight for racial equality, launched the “ACTION 70” project to help overcome prejudice and build better relationships between people, and viewed the Apollo 12 moon landing at Cape Kennedy, Florida, as guests of NASA.”